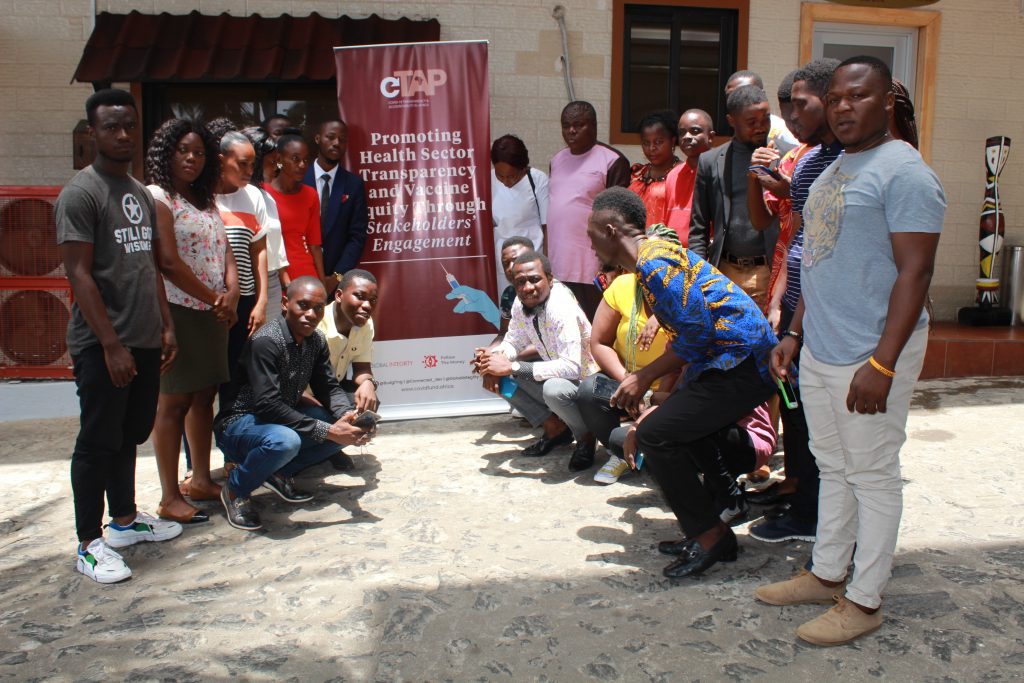 Since the inception of the CTAP project in Liberia, we have come to understand the importance of building coalitions and that to reach the Liberian population that we desire, we must be able to create long partnerships, and this is because BudgIT as a brand in the country is also relatively young. We needed all the support we could get from partners who have had long years of operation in the country. In light of our understanding, we have consistently passed the results of our work to the general public through the available social and traditional media and the coalitions we have created.

To open the project’s second phase in Liberia, BudgIT-Liberia held a one-day CSOs coalition meeting of phase II of its COVID-19 Transparency and Accountability Project through a panel discussion at Cape Hotel, Mamba Point in Monrovia on March 23, 2022. The coalition meeting brought together stakeholders from Civil Society organizations, government institutions and the Media under the theme “ promoting Health sector transparency and vaccine equity through stakeholders’ engagement”. The Coalition Meeting and CTAp phase II launch were published in the Hot pepper Newspaper, The Analyst Newspaper and Inquirer newspaper. Also, it was reported on three local radio stations: OK FM 99.5 , Freedom Radio Liberia and  Prime FM Monrovia .

The coalition meeting allowed us to check on the work we have done in partnership with YARD-Liberia Inc. in tracking the US$ 1 million stimulus package for teachers in Margibi County, the Housing Unit and lighting project in Grand Kru county,  stimulus package -Food distribution in Bong County, and treatment units in Montserrado county by Volunteer Hub Liberia. Taking it a step further now, the project’s new phase will look squarely focused on promoting health sector transparency and vaccine equity.

During the CSOs coalition meeting, We had a panel discussion to bring experts from the health sector, media, CSOs and members of the Liberian government to discuss how to promote vaccine equity and health sector transparency. During the discussion, we brought forth two female panellists as a way of promoting gender equality which, included; Mrs Siatta Scot-Johnson, the president of the Female Journalists Association of Liberia (FeJAL) and Madam Musu Kuleh Moore, a professional Nurse who works in the vaccine unit at the John F. Kennedy Medical Center. Mrs Johnson spoke on the topic “ the role of the Liberia media in promoting health sector transparency while Madam Moore spoke on the topic “ Myth About  covid19 and how to increase vaccine acceptance in Liberia”.

Grand Cape Mount county is among the counties surrounding the capital, Monrovia. Despite its closure to Monrovia, roads leading to the beach of Robertsport seem deplorable for vehicles, including ambulances or ministry of health vehicles carrying medications to the county. BudgIT saw it necessary to include Cape Mount in her COVID-19 Transparency and Accountability Project phase II. BudgIT invited several civil society organizations, community-based organizations, youth and student communities, disabled and traditional communities, and religious communities to discuss challenges, possible prospects, and recommendations to be addressed.  BudgIT’s team, at the start of the town hall meeting, explained to participants that the project aims to promote transparency and accountability in the health sector of Liberia through stakeholders engagements, including the media. .  Following the meeting, a Resolution on promoting transparency and accountability was developed and signed by participants and other relevant stakeholders that attended.  As usual for the town hall meeting, the session was later divided into working groups, including health workers and citizens who visit the health facilities to give their separate.

Participants at the training expressed disappointment in the government for allotting very little of the country’s budget to the health sector.  They have said such initiatives by BudgIT Liberia had brought an eye opener to the citizens of Liberia to advocate for transparency and accountability within the health sector.  The meeting was held to educate and stimulate the burning desire in citizens for proper medical health care and to develop a resolution to promote transparency and accountability in the health sector of Liberia.

The one-day dialogue brought together stakeholders from different sectors, including CBOs, CSOs, the media, Youth and women groupings and stakeholders from different health facilities across  Margibi county. The activity was published by several media outlets, including; OK FM, ELBC, and Radio Margibi.  The project is designed to listen to ordinary people and health practitioners about challenges affecting them in delivering/getting proper treatment and opportunities in the health sector. Most of the nurses who attended the one-day event in Margibi County expressed disappointment in the manner and form in which the government has run government hospitals in the country. They believe the lack of consultation with administrators of those various government health facilities are some of the results why non-essential drugs and delay in treatment has been on the increase. These meetings opened doors for open dialogues between the health workers and the health administrators. They gave room for expressing concerns that could improve the health sector in these counties across the country.

In the end, what we witnessed at the town hall meeting in Margibi County, was participants who came up with a RESOLUTION   and recommendations to be delivered to the national government.

Appearing on the Super Bongese Communication INC. with an official from the county health team to discuss challenges within the health sector, especially during the COVID-19 pandemic, as an offshoot of our coalition meetings. The dialogue in Bong County brought together nurses and people who visit government clinics and hospitals, expressing an interactive conversation on why some services are not being delivered on time or by nurses or doctors.   their diverse views about the lack of Transparency and Accountability in the health sector due to some factors beyond the nurses and doctors.  They have called on the government, backed by a RESOLUTION, to immediately address some of the major problems that negatively affect the health sector if there should be any improvement to meet international standards. After the meeting in Bong, other media outlets like KWATEKEH FM covered and published the story for the wider public who were not part of the event.

Following our COVID-19 Transparency and Accountability Project phase, II launched, BudgIT visited several counties, with Grand Bassa being among the most populated counties in Liberia that were included. According to BudgIT’s Program Officer, Emmanuel Kollie, who spearheaded the team outside the capital, the project aims to promote transparency and accountability in the health sector of Liberia through constant engagements with relevant stakeholders in the industry and the media. The program was designed to understand some of the challenges, opportunities and possible recommendations to institute transparency and accountability measures in the county health system by having a dialogue with stakeholders in the county, followed by developing a RESOLUTION  to promote transparency and accountability in the health sector of Liberia.  The town hall meeting brought together over 25 participants from different civil society organizations from other parts of the county. Before the town meeting in Bassa, BudgIT was invited to an hour radio show on RADIO DUKPA to discuss challenges affecting the health sector of the county and ways forward.  Citizens who phoned in on the show were astonished to hear people talking about transparency within the health sector, where there are no drugs in the various health facilities of the county, and nurses are not always available to provide service.

As part of the Covid-19 Transparency and project (CTAP), which focuses on health sector accountability, we held nine radio appearances and civic education on promoting transparency and accountability within the health sector, helping citizens’ understanding of the importance of participatory governance in punching the national legislature to improve on the health budget.

The radio appearances hosted some local authorities from the health sector and BudgIT’s team to answer questions about transparency and accountability within the industry. Most of the guests who sat on the radio show complained about the lack of proper monitoring and evaluation at various health facilities across the country, thus bridging corruption with workers at those facilities.