CTAP Strengthened the public and private health sector in Cameroon 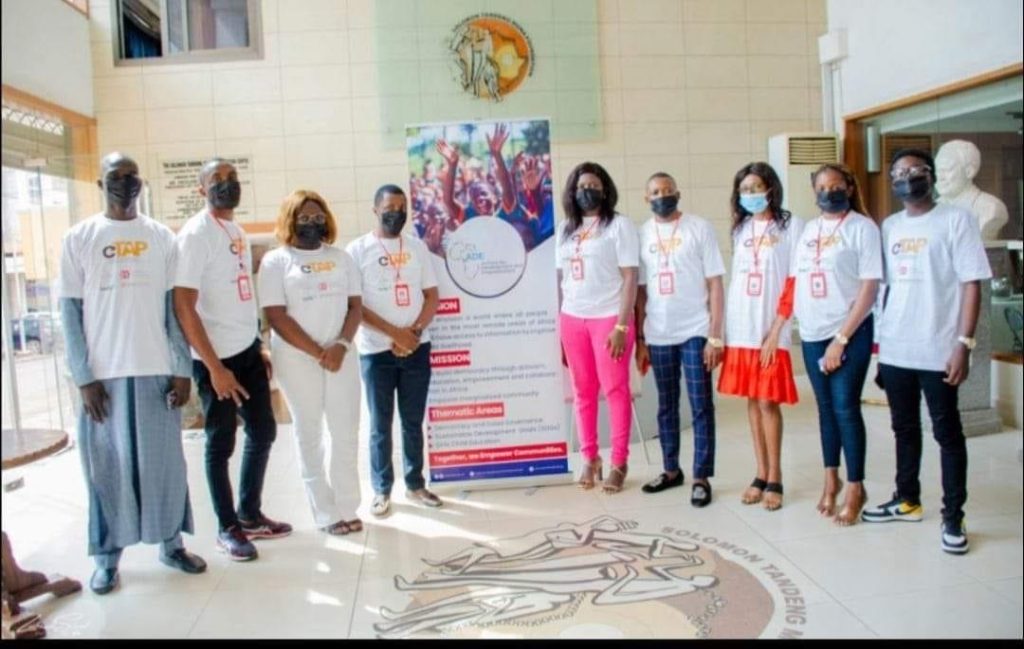 The first phase of CTAP in Cameroon documented the state of health facilities. It evaluated the government’s response to the coronavirus pandemic and the distribution of vaccines across the national territory to immunize the population.

After taking note of government inadequacies in the first phase of the pandemic, our engagements were centred on human-driven solutions that could benefit the country. Phase II of the project has allowed us to continue the engagements and focus on advocacy with national governance stakeholders to promote best practices in health sector management.

ADE, in partnership with CODE and BudgIT Foundation, therefore, launched the year 2022 with the organization of a coalition meeting on March 24th under the theme “Enhancing Health Care Accountability,” during which Civil Society Organizations and the media were brought to present the irregularities observed at phase 1: Mismanagement of funds, shortcomings in the health system ( no access to potable water, no alternative sources of electricity, no laboratories, doctors absent from their place of service, poor management of vaccines, no toilet separating men and women etc.,), and the Mismanagement of Health Services provided to the people of Cameroon.

This Coalition meeting aimed at bringing together all the participants to define a pathway of building momentum to hold the government accountable for increased health investments and ensure accountability and resource efficiency.

The day’s discussions focused on three different thematics: What approaches can be used to advocate for public sector engagement in health sector accountability? What strategy can we use to support the Open Governance Partnership (OGP) in the healthcare sector in Cameroon? How can we build a social media of leaders?

At the end of the meeting, it was recognized that a  reinforced collaboration between Civil Society and the media for better information sharing would be an excellent approach to advocate for public sector engagement; regarding the actions to be carried out in advocacy for the OGP, the laws on transparency, citizen participation and access to information guarantees the promotion of good governance practices. Participants concluded that to reach the Open Governance Partnership, an understanding framework for institutional and strategic dialogue for cooperation with the Ministry of Public Health, given concerted and favourable actions, is the best way to advocate for OGP. They equally saw the need to strengthen the capacities of independent health sectors for better synergistic initiatives, leverage data to enlarge, support and make an impact and the need for multi-stakeholder training on topics related to digital communication.

In response to the coalition meeting held with CSOs and the media, ADE researched the OGP in Cameroon and discovered that since it participated in the 2018 Regional Seminar of the Francophone Open Government Support Project, Cameroon has undertaken a series of activities to reinforce its eligibility for OGP under the impetus of the National Governance Program (NGP) and the Adisi-Cameroon Association. Cameroon’s eligibility score as of this date: budgetary and fiscal transparency (0/4), access to information (3/4), declaration of assets of elected representatives and senior officials (2/4), citizens participation (2/4), giving a total score of 7/16. As a result, working groups were established on the abovementioned themes to improve Cameroon’s eligibility scores. The stakeholders of these working groups, in addition to the ministry of public health, are those who ADE invited to the OGP meeting organized on June 8th. This meeting, themed “at what level is Cameroon in becoming a member of the OGP,” had as agenda the presentation of OGP work three years after the launch of the working groups, the different challenges faced by the four working groups according to each eligibility criteria and the various strategies to boost Cameroon’s eligibility and sign the OGP.

According to the stakeholders involved in the advocacy for OGP in Cameroon three years after the working launch, the eligibility scores have remained unchanged since 2019.

The target groups faced challenges in 4 different Sectors. In Budgetary and Fiscal Transparency, they met; a national legal and institutional framework that is incomplete and has poor alignment with international standards, insufficient capacity of the parliament, which aims to exercise its oversight powers during the planning and implementation phase of the budget cycle, limited participation of Civil Societies in the budgetary process due to the absence of a legal framework that customizes its involvement and capacity to lead during the public policies elaboration and low openness of information systems as they do not publish data inaccessible and reusable formats.

Under Access to Information; failure to take into account openness and access to information in the various texts devoted to news in Cameroon, Insufficient political will for open data, low interaction between data producers and requesters, demanding access to data produced by public administrations, lack of knowledge of the public on the possibilities of access to general information and the difficulties of particular administrations in delivering information in reusable formats.

On Declaration of assets of elected officials and senior executives; The incompleteness of the institutional system on the integrity and accountability of elected officials and senior public officials, limited means of the action of the governance institutions in charge of the establishment of the integrity and accountability like the Audit Chamber, the Superior Control of the State, National Anti-Corruption Commission (CONAC), National Agency for Financial Investigation (NAFI) and the cells ministerial anti-corruption, The ineffectiveness of parliamentary control over the action of the government and the other public entities, the complexity of the procedures for setting up a commission for parliamentary inquiry and Failure to adopt an anti-corruption law and The low remuneration of public officials.

On Citizen participation; The low use of ICTs in national governance, the compartmentalization of good practices, the weak promotion of tri-sectoral partnerships (elected officials-citizens-private sector), the insufficient resources allocated to citizen participation and weak citizen control over public action, Poor control of the tax base and inadequate planning and budget management capacity, Poor consideration of essential social services in public budgets and  Mutual ignorance of actors and their roles.

The discussion on the challenges faced by the four working groups permitted the participants to develop synergistic strategies that are believed to boost Cameroon’s eligibility and, thus, the signing of the OGP. These recommendations included, amongst others: conducting a soft approach and advocacy focused on improving scores on criteria, access to information and citizen participation, which in the Cameroonian context were easier to attain than other criteria and could fast-track the process through the sensitization of citizens (most especially women and girls) on the importance of the OGP and stakeholder advocacy efforts for the establishment of a framework law on access to information. It was also agreed that there was a need to expand the working groups by incorporating other stakeholders involved in the advocacy for the OGP in Cameroon and participation in the drafting of sectoral documents accepted by all stakeholders and acting as a regulatory system pending the creation of a framework law by the parliament.

After organizing the OGP meeting, which aimed at advocating for better practices in the health care sector by the government,  ADE carried out research that revealed the patterns and behaviours of Cameroonian citizens in the health sector: 53% of the target population of the study has access to modern health services, 92% is in favour of the establishment of a health insurance system, 92% say they use traditional medicine and only 49% regularly use the public health system. Citizens’ perceptions of modern health care were also analyzed. This result shows that the population prefers self-medication and consumes street drugs to the detriment of health facilities (pharmacies, hospitals), which considerably impacts the development of Cameroon’s healthcare system. Also, during the pandemic, ADE observed that the population was not receptive to the vaccine made available by the government.

Taking all these into consideration, ADE organized a series of town hall meetings in the targeted localities of Kiiki in Bafia Sub-Division of the centre region, Bertoua 2éme in the  East region, Sabga in the North West region, Mora in the Far North region, Bandevouri in the South region and Soa in the Centre region of Cameroon to advocate for the development of the health care system in Cameroon. According to these observations ADE focused the advocacy visit discussions two main thematics: The dangers of self-medication and street drugs and the role of the population in the development of the health system and its community: representatives of the communities visited gave reasons for preferring self-medication or traditional medicine over modern medicine such as; poverty to afford pharmaceutical drugs or access health care services, lack of adequate care from medical personnel upon arrival and stay at the hospital pushes them to self-medicate under comfortable conditions, cumbersome procedures of obtaining health care services, the corrupt nature of some medical delegates, the little or no availability of qualified and permanent medical personnel in hospitals or health care units acts as a discouraging factor to these communities and the poor state of some of these health care units (insufficient power supply, a deficit in terms of equipment) inadequately trained personnel, high prices of drugs and administrative bottlenecks. These communities were encouraged by ADE team members who visited the various localities to choose health care services as a first resort for proper illness diagnosis. The team said this in cognisance that traditional medicine has its place but should come after medical diagnosis.

The importance of vaccination: after observing Cameroonian citizens were not receptive to the COVID-19 vaccine, ADE sought to sensitize these s communities to the crucial place of vaccination. Participants attested that the fear of the unknown pushed them to reject the vaccine, i.e. miscommunication from every end on the vaccine, with a popular one being that the vaccine was out to reduce the African population. Other hindering factors are; the numerous nature of the vaccines worldwide made this vaccine seem like a game of interest, and consequently, these communities could not trust the vaccine. These communities expressed the need for African governments to promote African-made vaccines than western made. ADE left these communities with the message that vaccination is the best way to protect themselves and others from diseases and pandemics.

At the end of the discussions, recommendations were made in correlation with Cameroon’s health sectoral strategy, which aimed at reinforcing the contribution of the health sector to eradicate poverty through Work in effectiveness for the universal access of vulnerable populations to quality healthcare services; specifically, it has to do with: appointing a Chief Medical Officer (CMO) at the Bandevouri medical centre, with preference to someone with full availability and disposition in the community, the need to subsidize prices of some essential drugs in grassroots communities (Kiiki, Bandevouri, Bertoua 2e, Mora, Soa and Sabga) to permit low-income earners to go to the pharmacy to have access to drugs, intensify health campaign programs to better sensitize the population on health-related issues.

Reduction of morbidity and mortality of the population for an increase in life expectancy; specifically, it has to do with: equipping health facilities in these areas with modern materials and ensuring quality control and maintenance (Kiiki, Bandevouri, Bertoua 2e, Mora, Soa and Sabga), provide the different health facilities with alternative power supply and make provision for potable water in these zones, especially in their healthcare facilities.

Reinforce the health system; specifically, it would have to do with: putting an accent on the respect of deontology by professional healthcare personnel, giving the Ministry of health a telephone line for the denouncement of poor treatments, fighting against corruption administrative sanctions for corrupted medical personnel and control of drug supply points by the ministry of health (MINSANTE).

Reinforce partnership in the health sector; specifically, it has to do with: restoring citizens’ confidence through free healthcare campaigns and open days for constant awareness raising, integrating Civil Society Organisations (CSO) working in the different localities for a better implementation of sensitisation campaigns because they are close to the population and know how to approach them.